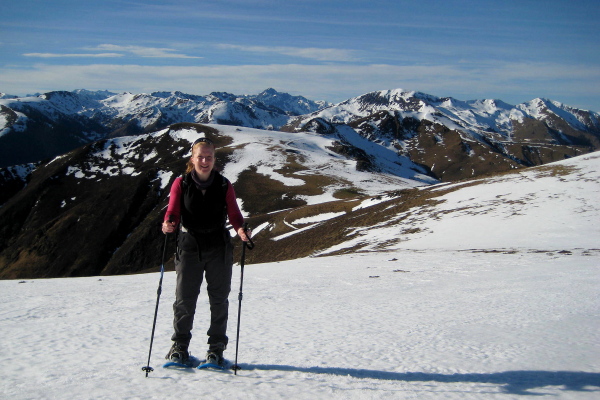 Snowshoeing adventures in the Pyrenees

Having spent two glorious weeks hiking in the warm and sunny Pyrenees a few months earlier, last January I ventured back to experience the magic that winter brings to this wild, unspoilt corner of France.

A bit disappointed that ski touring wasn’t really an option this early in the season, the Adventure Creators offered up some snowshoeing adventures as an alternative. An avid outdoor lover, and never one to turn down an adventure, I snapped up a couple of days with one of the Adventure Creators’ local guides Jean-Noel. 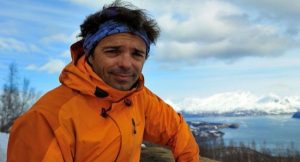 At lower altitude, and less intimidating than the Alps, the Pyrenean mountains in January are topped with snow, but, more rustic in nature, the region boasts fewer and smaller ski areas. Perfect for those who relish the satisfaction of topping out on two feet, rather than by ski lift.

Less arduous than ski touring, snowshoeing enables access into remote, less skiable areas. The shoes themselves attach onto hiking boots, increasing the surface area of each foot plant, and rendering deep snow travel enjoyable. Believe me, the novelty of sinking knee deep with every step quickly wears off without them!

Our first day took us up on a ridgeline hike from Port de Bales (1755m alt) near Bagnères-de-Luchon. Accompanied only by a pair of kite skiers, we crunched through the snow, the small spikes on the base of the shoes gripping reassuringly on what would otherwise be treacherous icy patches. 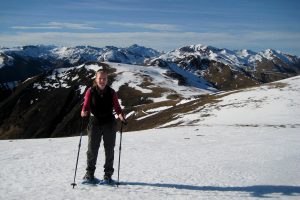 A clear blue sunny sky and light breeze, it felt more like spring than mid-winter. As we reached the highest point, my breath was taken away as an astonishing view of the mountain range opened up, stretching as far as the eye could see, accompanied only by the gentle and soothing jangle of cowbells in the valley below. And the Pyrenees just kept on giving: eagles soaring high in the sky before a stunning sunset and the remainder of a flask of tea. A perfect end to the day.

Due to deteriorating weather conditions on the second day, Jean Noel took me on a shorter hike up to Col de L’Aouet, a local off the beaten path secret where wildlife often roams undisturbed. 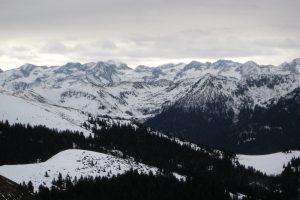 Passing by an abandoned stone hut tucked into the trees, we went in search of deer. However, disappointingly they weren’t playing out. In hindsight they were quite probably hunkered down in anticipation of the brewing storm.

As we trudged up to the ridgeline the wind picked up and it started to snow. And what a sight it was. Clouds were rapidly engulfing the Pic du Midi in the distance and were heading our way with pace. Just awesome! Then suddenly, Jean-Noel pointed skywards, ‘look, look!’ Soaring right over our heads was a Gypaete Barbu otherwise known as the Lammergeier or Bearded Vulture, the rarest bird of prey in the Pyrenees. Wow!

In my view, the Pyrenees are a more reserved, understated mountain range than the Alps. They have an authenticity and wildness that is quite captivating. As for snowshoeing there, well, there is a common perception that snowshoeing is skiings’ less glamorous, humdrum and rather boring little sister.

But an ugly duckling it most certainly is not. On the contrary, those who have ventured out on snowshoes in the Pyrenees mountains will tell you that the tranquillity and magic that you will find there is a far cry from the hustle and bustle of the crowded ski slopes which come with a ski package holiday in the Alps.

John uttley
Reply
Iam smitten also with Pyrenees. I walked the gr10 to bagnols in September and am about to go up to Andorra again. I have 2 types of snow shoe, one fits my ski boot so I pack the skies for the descents where possible and use the snow shoes to climb up. It a great way to keep my 60 year old carcass in shape. Lovely post and good luck for the future. Happy days

Penny Walker
Reply
Thanks so much for taking the time to comment, John, and especially for your kind words. Lovely to hear from a fellow Pyrenees enthusiast! Sounds like a great plan to snowshoe up and ski down. I think that idea is gradually catching on up in the Cairngorms now too ;-)