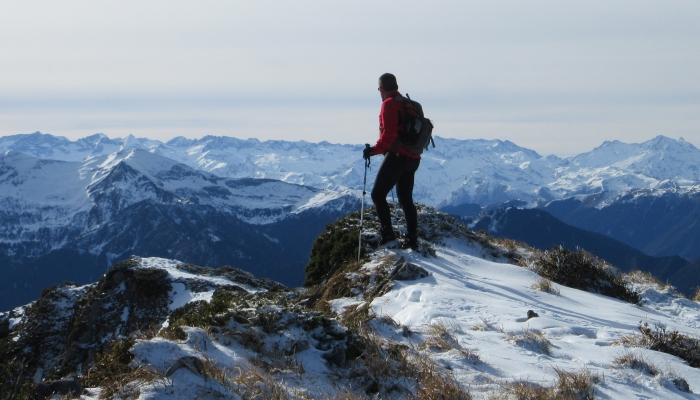 Over 15% of the world’s population live in a mountain environment. The world’s mountains provide freshwater for everyday life to half of humanity and one third of plant species are found there.

Yet this precious environment is under threat not only from climate change but from man’s influence too.

In order to raise awareness of the importance of the mountain environment to our planet, the United Nations declared 2002 the UN International Year of Mountains.

Every year since, on the 11th December, International Mountain Day has been celebrated, with a different theme each year.

In 2020 the theme is Mountain Diversity which is, not surprisingly, a theme that’s very close to our hearts here in the Pyrenees mountains.

Diversity in the Pyrenees mountains

The importance of the diversity of life in the Pyrenees cannot be underestimated.

The ecosystems, flora and fauna of several areas of the Pyrenees are protected through projects such as Natura2000 and the National Park organisations.

Created in 1967, the Pyrenees National Park is one of the oldest in France and also one of the richest in terms of the diversity of its flora and fauna.

The park includes one of our favourite areas in the whole of the Pyrenees, the Neouvielle Natural Park, an area of stunning lakes, dramatic peaks and wooded landscapes.

It’s a mecca for nature enthusiasts and hikers who can stay overnight in a mountain refuge and observe the Milky Way from beside one of these pristine lakes.

It’s also worth mentioning Natura 2000, the largest coordinated network of protected areas in the world which offer a haven to Europe’s most valuable and threatened species and habitats.

In the Hautes Pyrenees department alone there are 22 such protected sites of which the Haut Louron area is one of the most dramatic.

Diversity of flora in the Pyrenees

The variety of flora in the Pyrenees is huge, with around 325 endemic species, subspecies and variety of plants across the mountain range.

On our various hikes in the mountains of the French Pyrenees we always keep an eye out for new and unusual flowers.

Some of our favourites so far have been the Pyrenean lily (Lileum pyrenaicum), with it’s distinctive Turks turban shaped flower, the Pyrenean fritillary (Fritillaria pyrenaica) and the Pyrenean equivalent of the bluebell, the Pyrenean squill (Tractema lilio-hyacinthus).

The best time of the year for experiencing the full beauty of the wildflowers in the mountains of the Pyrenees is from mid May through to the end of June.

The hillsides erupt into a feast for the eyes, a glorious display of colour and shape in which hundreds of varieties of wildflowers decorate the landscapes.

Diversity of wildlife in the Pyrenees

The unspoiled and rugged mountains of the Pyrenees are home to a huge diversity of animal and bird life.

The fact that the populations of the reintroduced ibex and brown bears are expanding is testament to just how wild the mountain environment is in this part of the world.

The highest mountains are craggy and devoid of trees, perfect for the mountain goat-like ibex and chamois, whilst the lower slopes are densely wooded and provide protection for the shy brown bears.

The rocky mountain outcrops also provide the perfect environment for the rarest vulture in Europe, the bearded vulture, to breed in peace.

You may be lucky enough to see marmots on your mountain hikes too although the chances are you’ll hear their shrieking alarm call before you spot them!

Then at lower altitudes, in the autumn, the red deer rut from mid September through to mid October is a great opportunity to observe Pyrenees wildlife from close quarters

The geology and geography and their associated ecosystems in the Pyrenees mountains are some of the most diverse in Europe.

The northern, French side of the chain is characterised by generally lush, green landscapes and junglelike river gorges down which water from the high mountains flows.

In complete contrast, the southern Spanish side is generally much drier, more arid, with ecosystems that are a huge contrast to further north.

Nowhere is this contrast more evident than in the Ordesa and Monte Perdido National Park where dramatic limestone gorges and unique geological formations dominate the landscape.

This area is a haven for unusual migratory birds. These include the tree-creeper and numerous birds of prey such as the rarest vulture in Europe, the Lammergeier, golden eagles and peregrine falcons.

Diversity in culture and heritage

But it’s not only the diversity of the natural world that we celebrate in the Pyrenees mountains.

The chain is also blessed with a melting pot of cultures, food and even language thanks to the proximity of France with Spain.

You may hear a wide variety of languages and local dialects when out and about and even see street names in two languages.

One of these is usually Occitan, an ancient language that is still spoken in Catalonia and in many areas of south western France.

You can also experience a huge variety of foods during a stay in the Pyrenees, eating tapas for lunch in Spain and then crepes back across the border in France in the afternoon.

However, one thing the two sides do have in common is the outstanding cheeses and charcuterie that are produced in the mountain environment.

On this International Mountain Day we believe that #mountainsmatter.

We’re committed to raising awareness of the unique Pyrenees mountain environment and its habitats by working with only local guides and experts who are delighted to share their knowledge and passion for the Pyrenees.

You can read more about our sustainable tourism policy here and check out the numerous mountain adventures that we can arrange for you here.

Isn’t it about time you discovered the rich diversity of the Pyrenees mountains?