You won’t believe how hard it has been keeping this amazing, and cute, news secret!

One of the world’s rarest birds, and the world’s rarest penguin, the Pyrenean Rock Penguin (Pinguissa pyrenaicus) has successfully hatched a chick in the wild. The bird has been extinct in the wild since 1984 when the last pair of wild penguins were shot and eaten by a hunter, who mistook them for the altogether more common Pied Eagles. 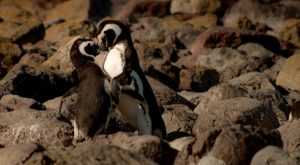 Luckily, before this tragedy, experts at Toulouse Zoological Park had already established a captive breeding programme.

This was aimed at trying to boost the dwindling birds’ numbers.

Thanks to some clever match-making in captivity, numbers increased.

Six of these comical creatures were released 2 years ago at a lake in the Pyrenees which was once one of their natural feeding grounds. 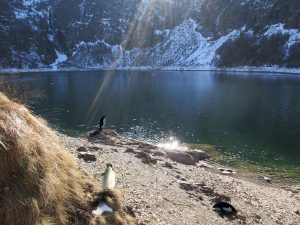 Lac d’EsPingu (1507m / 5000ft) in the spectacular Oô-ooô Valley is ideally suited to the penguins.

The steep sided valley provides safe places to nest out of reach of the Brown Bear, Pyrenean Dahu and Ibex which inhabit this wild landscape.

It is however within easy flying distance of their main food supply down at the lake.

The lake provides plentiful food supplies when the annual migration of Atlantic mackerel up the Garonne river arrives to spawn in the spring.

The return of the mackerel (known locally as Poisson d’Avril or ‘April Fish’) in late March or early April coincides with the hatching of the hungry penguin chicks. 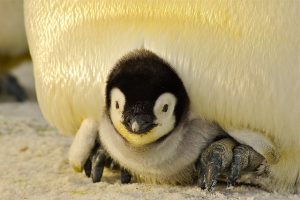 During the breeding season, visitor numbers to the lake are strictly regulated to protect the shy penguins whilst they rear their young.

However, as a valued partner of the Office National de la Chasse et de la Faune Sauvage (ONFSS) we have been granted a special license to take small groups of clients, strictly accompanied by a guide, to visit the breeding area.

As with all our trips, The Adventure Creators only use qualified guides and you will be able to learn lots about the penguins in addition to having some great photo opportunities.

Our meeting point will be at le Lac d’EsPingu, thought to have been named after these wonderful creatures in the 13th century. From the lake we will further explore the beautiful Oô-ooô valley, which is likewise reported to have got its name from the mating call of the penguins in years gone by ……’Oô-Oô-Oô’. Visitors in early April may once again hear this majestic call echoing from the valley walls.

You may already know that the Adventure Creators team is passionate about the wildlife in the Pyrenees and have been closely following the reintroduction of the brown bear, lammergeier and ibex over the past few years. We are delighted to have yet another fascinating and, lets face it, unbelievably cute creature breeding in our immediate area.

Jennifer Trehane
Reply
I've only just found this message, posted on April 1st ? Have the Pied Eagles eaten any of these extraordinary penguins yet ?