The Brown Bear in the Pyrenees

The Brown Bear in the Pyrenees

NON AUX OURS! No to the bears! You’ll no doubt see these words spray painted on roads and on buildings throughout the central Pyrenees.

It’s fair to say that the rejuvenation of the brown bear population in the Pyrenees is a controversial subject and not everybody is as delighted or excited by their presence as we are. So what’s the deal?

The history of the brown bear in the Pyrenees 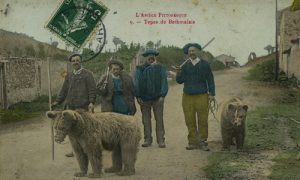 Brown bears (Latin name Ursus arctos) have always existed in the Pyrenees. They have however had a chequered history.

In the past they have been hunted for their skins and young cubs were captured and trained to perform for a curious public.

As the 20th century progressed, man’s actions started to affect a huge part of the bear’s territory.

The development of mines in the mountains and the creation of transport links through the mountains and valleys were the main culprits, forcing the bear to seek alternative havens. Hunting also continued apace.

By the 1940s, the Pyrenees were home to France’s last remaining bear population. By 1954 just 70 native Pyrenean brown bears were scattered across the Pyrenees.

By the 1990s, the number of brown bears in the Pyrenees had dwindled to dangerously low levels.

The reintroduction of  brown bears in the Pyrenees 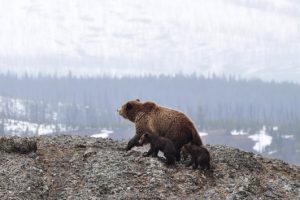 A reintroduction programme supported by the French Government and with EU financial support was launched in 1996.

Three healthy brown bears from Slovenia were released in the central French Pyrenees in an attempt to regenerate the waning population of native Pyrenean brown bears.

The programme was however met with resistance, especially from farming communities who feared for their livestock that roam the high mountain pastures (known as estives) in the summer months.

A generous compensation package was put in place to compensate farmers for the loss of sheep if it could be proved they had been killed by a bear. Farmers were also educated on how to best protect their flocks using the fearsome Patou dog to good effect.

In 2004, the last of the native Pyrenean bears, a female named Canelle, was shot by a hunter. To add salt to the wound, the bears brought from Slovenia did not flourish as well as hoped. 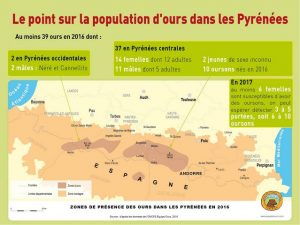 The central Pyrenees, which is where The Adventure Creators operate, is home to the overwhelming majority of the brown bears in the Pyrenees.

At the end of 2017, there were over 43 bears, the majority concentrated in the central Pyrenees. In the course of 2018 numbers rose to over 50 as 9 or 10 females had cubs and an additional 2 females were introduced in the western Pyrenees.

The original male brown bear that was released in the Pyrenees in 1997 is a hulking great bear called Pyros who weighs in at around 250kgs. 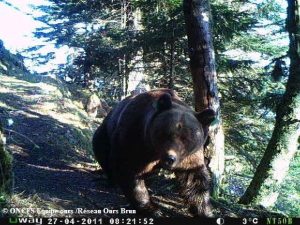 He is now 29 and the emblematic bear of the Pyrenees.

All of the brown bears born in the Pyrenees since 1997 can be traced back to him.

Therefore in order to dilute the genetic pool, a new male was introduced in 2016.

Goait is 11 years old and has successfully secured his own territory from the mighty Pyros.

The introduction of this male can only strengthen the population of the brown bear in the Pyrenees.

Why the Pyrenees are the perfect environment for the brown bear 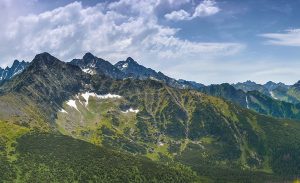 Brown bears like to roam. They have a wide range which covers 100s of square kilometers.

The central Pyrenees are sparsely populated, with vast expanses of pristine mountain hillsides that provide all of the factors that are critical for the brown bears’ survival.

The brown bear is an omnivore. Around 80% of its diet is herbivorous. It loves wild raspberries, bilberries, nuts and fresh grass shoots. It will also eat small dead animals. Only rarely and if it is very hungry will it actually kill for food.

If you have been following us on Twitter or Facebook, you’ll know that The Adventure Creators are passionate about the wildlife in the Pyrenees and especially about the brown bear. 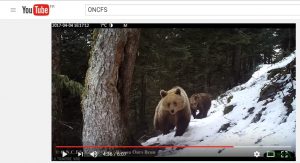 We are delighted to have forged close links with the organisations and individuals who are responsible for the monitoring of the brown bear population in the central Pyrenees.

On the French side, the Office National de la Chasse et de la Faune Sauvage (ONCFS for short) is responsible for monitoring and protecting the brown bear population.

How you can discover the brown bear in the Pyrenees 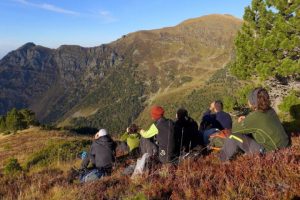 There are two ways in which members of the public have the opportunity to discover the territory of the brown bear in the Pyrenees.

You stand the best chance of catching a glimpse of this elusive animal in a particular corner of the Spanish Pyrenees where, at the time of writing, two males, a female with 2 cubs and a lone female have been spotted this spring.

Thanks to our relationship with the only licensed bear tracking expert in the area, you can fully immerse yourself in the bear’s mountain environment over a period of 5 days in the springtime and again in the autumn. 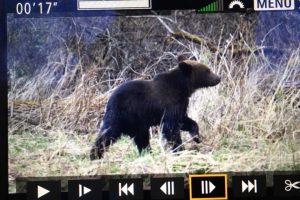 Sleeping in a tent, you’ll be out of your sleeping bag at dawn and glued to your binoculars, scanning the hillside for a glimpse of the bears as they forage for food.

You’ll work with the local experts to look for tracks in the mud and for fur left on their rubbing posts and also review the videos and photos collected by the movement detection cameras.

This is a genuine wildlife tracking experience and not some out-of-the-can wildlife safari on which a spot is guaranteed!

Over the border in the French Pyrenees, we are collaborating with the Pays de l’Ours association to offer an exceptional day experience of tracking and monitoring the brown bear in the Melles area. 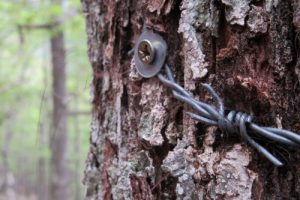 This hands on experience combines a solid off the beaten path day hike with the collection of scientific data that is used to track the movements of the brown bear in the Pyrenees.

You’ll collect fur samples, look for footprints and bear droppings as well as check videos and photos from the strategically placed cameras up in the bears’ territory.

The experience doesn’t end there, however.

Fur that you collected may be sent off for DNA analysis and you’ll receive news by email as to which bear you had been tracking!

You’ll also receive copies of the photos taken by the devices and be the first to see videos too. This an immersive wildlife experience through which you’ll gain first hand knowledge about the brown bear in the Pyrenees.

As the brown bear population in the Pyrenees continues to grow, we hope to play our part in educating people about this evocative animal. Through immersive experiences using nothing but local expertise, you’ll become as captivated by the brown bear as we are, guaranteed! 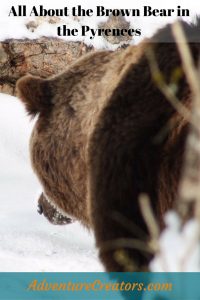 Penny Walker
Reply
Nancy, that's so interesting. I'm ging to drop you an email as I'd love to know more. Thanks so much for commenting.
previous
1
2
next